Manually Insert a Song Available on the Forum

In this tutorial, we'll be using FF3us to import a song that is already in the FF6 music format. You do not need musical knowledge to complete the following steps. The only thing that will help is being familiar with the hexadecimal system, offsets, the difference between an absolute and HiROM offset, and hex editors.

1. Getting the file and tool

We'll be using the FFIV song "The Prologue" from our Song Database. The other thing you will need is a hex editor. There are many you can choose from, but I'd suggest one that has copy selection, paste-write, and paste-insert functionalities. One good all-purpose hex editor is HxD, and this is what has been used to take the screenshots below.

2. Files we will be importing

Extract the files from FF4_prologue.7z, and you will see the following files:

prologue.spc is the song in SNES format. These files can be played with an SPC player or by using winamp and a plug-in. For more info on SPC files and how to play them, use Google or check out the great extracted music tutorial at FantasyAnime.com. The DATA and INST files are both binary files; the former contains the music data in FF6 format, and the latter contains the instruments used in the song. The DATA and INST files do not contain instrument samples, as those are in the game already.

We provide the same three files for every song in our song database. Some songs (most were made by tsushiy and have a “ᵖ” next to their title) require the instrument patch, which is available in the same thread. This patch installs new BRR samples in the game, giving access to a wider range of instruments to use in songs. Some song instrument (INST) files use those added instruments. This is not the case with our prologue song, so we do not need to apply the patch in this tutorial.

The first thing that you have to ask yourself is “Do I want to replace an existing song or expand the number of existing songs?” If you only want to replace a existing song, you can skip to section 4. You must follow several steps to expand the number of songs. First, you have to move the song pointers block at $C53E96-$C53F94 because there is no room to add an extra one. To find free space in a non-expanded ROM, you can look here. The offsets in this list take the ROM header into account, but my whole tutorial assumes that you have a headerless ROM, so you must subtract 0x200 from the offset you choose. You can also expand your ROM and put the pointers in the $FX banks.

For this example, I chose the spot at $EEAF01, which contains 767 free bytes. This is more than enough to contain the song pointers. As shown in the image below, I:

Let's say that I want to put my song at $F30540, which is in expanded ROM. I would type 40 05 F3 at $EEB0000 (see right picture above). In this example, you would use song ID $56 to play your new song from event code. As you may have guessed, pointers are always inverted regardless of whether they are two or three bytes long. As for the old pointer data that you copied, you can overwrite it with 00 or FF since you moved it, giving you room for other things if needed. 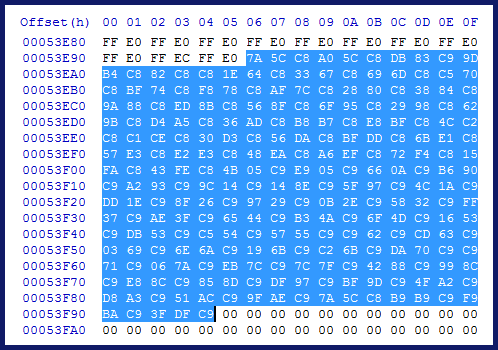 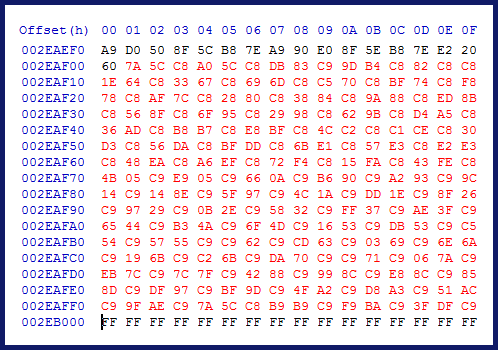 The last thing to do is to change the total number of songs. The offset where this value is stored is $C53C5E. It's a single byte that should be $55. Increase it by one each time you add a new song (replacing an existing one does not count). Congratulations! You have now expanded the pointers, so you can add up to 255 songs!

The next thing to do is to verify if your song fits in the spot that you have chosen. If you expanded the song pointers and put your song in expanded ROM, you likely won't have to consider the following, but some info is still important. Open the DATA file with HxD. The first two bytes (inverted) show the amount of space (in bytes) that the song takes up. In our case, the song is 0x044C bytes long, as seen below.

You have to verify the song will not “hit” and overwrite the next song or the data after. If you want to locate your song in regular non-expanded ROM that is outside the song block, refer to the ROM map to verify this. All you have to do is add the song length to your song offset and verify that it is lower than the offset of the following data. If you are only replacing a song with The Prelude, check the song list. The songs are in the same order that they appear in the ROM. You need to consider the starting offset of the song following yours. I decided that we will replace “Another World of Beasts”.

We are below the $0x04CC byte limit because The Prelude is only $0x044C bytes long, so we are ready to insert the song!

Now copy the song data to your ROM.

Optionally, you can overwrite the rest of the old song with 00 or FF. That way, you can easily see where there is unused space.

If you have to put your song elsewhere in the ROM, you need to modify the pointer. You can calculate its position with the formula below:

After locating the pointer, change it to the new offset of the song (inverted).

Now the other part of the job is changing the song channels' instruments. It's the same logic as calculating the offset of a song pointer, except that you multiply your song ID by 32 (0x20). The instruments file is 32 bytes in size (16 channels times 2 bytes per instrument). The first byte for each channel is the instrument ID, while the second byte is always 00.

Once the instrument data is pasted, save your ROM. Note that you can save (Ctrl+S) anytime during the tutorial; it does not matter.

You'll notice that The Prelude has 6 instruments. As mentioned previously, some songs downloaded from the forum (not a majority) might have incorrect instruments. In such an event, you'll need to assign the correct instruments. There is a complete list of original instruments here. You'll need to identify each channel's instrument and replace the ones you think are wrong. This requires a bit of trial and error, but you'll develop your music skills. If you have instruments IDs in your file that are $40 and above, it means that your song requires the instrument patch available in the same thread as the song. The songs requiring this will have a “ᵖ” next to their name. These songs often have incorrectly assigned instruments as well because the authors sometimes add more instruments to their hacks without notifying the admins, resulting in instrument indexes above the limits of the patch.

One thing that differs between songs available on the forum and original songs are the channel pointers in the song. The image below shows a channel of The Prelude. The song loops from the end of the highlighted section to its beginning. The last command is F6 02 04, which loops the song by going back to the offset that is 0x0402 bytes after the start of the song. For every song in the original game, these commands are relative to their offset in the ROM, so this F6 command would look similar to F6 8E F3 ($C8F38E) instead. However, it would not be exactly this because a song don't redo the first channel commands. I wanted to talk about this because such a tutorial would not have been possible with an unmodified original song. If you moved or inserted a song, you would have needed to change every song loop command and channel pointer! By having the custom song channel pointers start at 00 00 and not the song offset's last two bytes, we make the process a lot easier.

Below, there is a loop command of an original song pointing to $C8F9B9. In the case of a custom song, this command would be something like F6 0X XX instead, likely a number below 0x0A00.

This tutorial was aimed at beginners. The rest of music hacking is harder and require some practice. However, it is within the abilities of anyone who has the time and patience to learn. To serve as a conclusion, I've made a small video that shows the import and simultaneously pays a little tribute to those who contributed to the song database.

Except where otherwise noted, content on this wiki is licensed under the following license: GNU Free Documentation License 1.3